Fire Fighter Hayden unboxes the 2022 Saskatchewan Fire Fighters Calendar and he had no idea that he was featured on the cover. We would like to extend a thank you to everyone who attended the 2020 Saskatchewan Fire Fighters Calendar Selection Night on May 9th as well as to those who placed votes for our Fire Fighters at the event and online from across Canada.

Special thanks to all the Fire Fighters for the work that they do in our communities and who stepped out of their comfort zone to make this event possible. Thanks also goes out for all the help from our event sponsors and volunteers.

Together we were able help Jim Pattison Children’s Hospital Foundation and make a difference for the kids and moms in Saskatchewan. The results are in and our 2019 calendar is #5 in the world!  The 2019 Saskatchewan Fire Fighters Calendar has been ranked once again on the Fire Critic’s list of Best Fire Fighter Calendars.  Their annual review has become the gold standard in ranking Fire Fighter Calendars around the world.  It is great to be recognized for all the hard work that the Fire Fighters, production team, sponsors and committee members put into the calendar.

As we celebrate our 16th annual edition we know our calendar is special as we fulfill online orders from all over the world every day.  It is also a hit here in Saskatchewan. 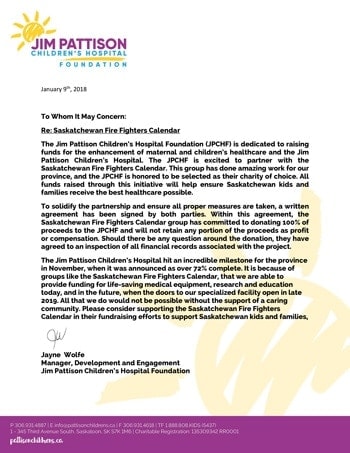 To Whom It May Concern:

The Jim Pattison Children’s Hospital Foundation (JPCHF) is dedicated to raising funds for the enhancement of maternal and children’s healthcare and the Jim Pattison Children’s Hospital. The JPCHF is excited to partner with the Saskatchewan Fire Fighters Calendar. This group has done amazing work for our province, and the JPCHF is honored to be selected as their charity of choice. All funds raised through this initiative will help ensure Saskatchewan kids and families receive the best healthcare possible.

To solidify the partnership and ensure all proper measures are taken, a written agreement has been signed by both parties. Within this agreement, the Saskatchewan Fire Fighters Calendar group has committed to donating 100% of proceeds to the JPCHF and will not retain any portion of the proceeds as profit or compensation. Should there be any question around the donation, they have agreed to an inspection of all financial records associated with the project.

The Jim Pattison Children’s Hospital hit an incredible milestone for the province in November, when it was announced as over 72% complete. It is because of groups like the Saskatchewan Fire Fighters Calendar, that we are able to provide funding for life-saving medical equipment, research and education today, and in the future, when the doors to our specialized facility open in late 2019. All that we do would not be possible without the support of a caring community. Please consider supporting the Saskatchewan Fire Fighters Calendar in their fundraising efforts to support Saskatchewan kids and families, As we celebrate our 15th annual edition we know our calendar is special as we fulfill online orders from all over the world every day.  We’ve recently shipped orders as far away as Denmark, New Zealand, Australia, numerous states in the USA and almost all provinces in Canada.  It is also of course a hit here in Saskatchewan. 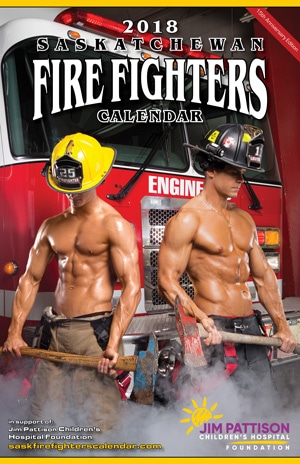 We thought you would like to see the unboxing of the 2018 Saskatchewan Fire Fighter Calendars. Congratulations to Fire Fighters Lincoln and Justin who appear on the calendar cover. They had no idea it was them! Thank you to Chief Dale for capturing the big surprise on video. This is the first year the calendar has accepted volunteers, people paid on call, those in the military, and other types of firefighters, with the previous 14 years being restricted to Saskatchewan professionals only.

“It feels great; I’m glad I got selected and had the ability to take part in the selection night, it was a lot of fun,” said Empey.

In preparation for the selection night, which took place last Thursday, Empey and Charron were offered free services from a trainer with KY Fitness out of Saskatoon.

She put the pair on a four-month low carb, high protein diet for four months, with a tonne of cardio exercise as part of the workout routine, and Empey said he shed close to 30 pounds by the time of event.

He admitted he was a bit self-conscious before losing the weight, but after the success of the regime he was more confident going on stage.

He likened the selection event to a ladies night, where a crowd of women judges picked 12 finalists from a group of 16 by voting in person and online.

In the end he and Charron impressed the gathering of judges enough to be chosen to adorn the pages of the upcoming calendar.

“You went out on stage then you shook hands and gave hugs, that kind of thing,” said Empey.

“(Then) when we did get selected for the top 12, we went out in our turnout gear. They haven’t actually taken the photos for the calendar yet.”The photo sessions are anticipated in the next couple weeks.

Empey’s been a firefighter for 10 years now, signing up a decade ago when he was looking for a service club to join.

He said he saw an ad in the newspaper looking for volunteers, and because he considers himself an adrenaline junky, he thought it would be a good fit.

Charron, who’s been part of Estevan Fire Rescue for more than a year, also signed up in part for the adrenaline rush, and much like Empey, enjoys the community aspect as well.

When it came time to hit the stage and be judged – which contestants had to twice throughout the night, then one more time if they were selected like Charron and Empey were – he agreed it was a bit tense, but joked he was more steadfast than his pal.

“I wasn’t near as nervous as Lincoln was,” Charron said with a laugh.

“But Lincoln came a long way and he killed it out there; it was a little nerve racking, but after the first time you go out there on stage you clear the nerves, and it really helped knowing that everyone is there for the same reason, so you’re not the only one who’s nervous there.”

All proceeds from the Saskatchewan Firefighters Calendar, which should be available to purchase this fall for $19.99, are going to the Saskatchewan Children’s Hospital Foundation this time around.

Both Charron and Empey said it’s a great cause to support and hits close to home because Payton Sernick, daughter of Andrea Sernick who’s a fellow Rotary Club member with Charron, was diagnosed with stage 4 cancer and has since become an advocate for the importance of having a Children’s Hospital in Saskatchewan.

“It’s just kind of nice to be able to support a cause that someone in Estevan, is using and supporting as well,” Charron said. 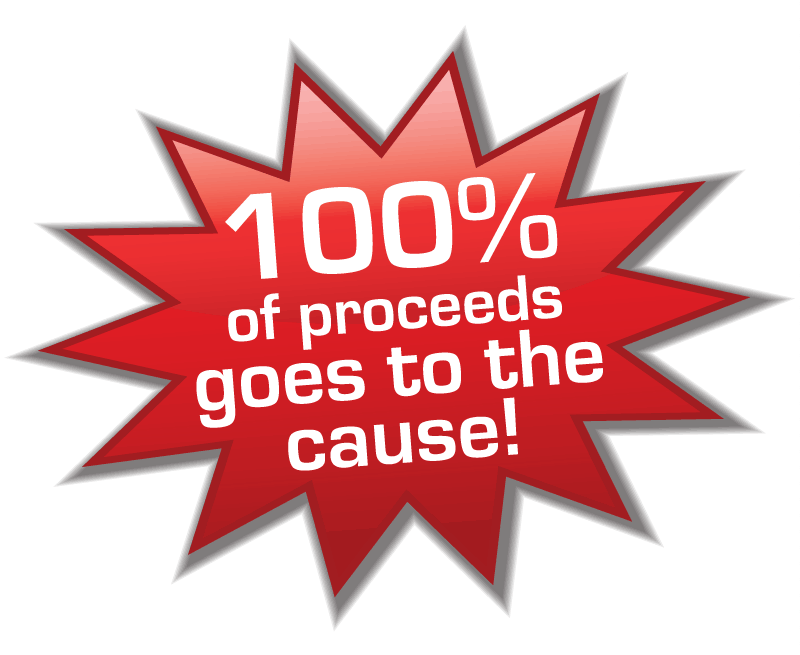 Our project upholds the highest values and integrity.  We have made a commitment that all proceeds from the 2018 and future calendar projects will go to the Jim Pattsion Children’s Hospital Foundation.  This includes all calendar sales, Selection Night tickets, and other revenue related to the calendar raised.

To ensure accountability we have a written legally binding agreement with the Jim Pattison Children’s Hospital Foundation that 100% of the proceeds will go to to them and be kept by them.  All finances related to the project will be independently audited and we have agreed that the charity can inspect the finances at any time.

We know there are lots of charity fundraising projects asking for your support and we want to assure you that when you support the calendar project, you do directly support the cause.

Read the Letter from the Jim Pattison Children’s Hospital Foundation regarding Proceeds: Subscribe to our free Red Alerts Newsletter and get the latest calendar information approximately twice a year.